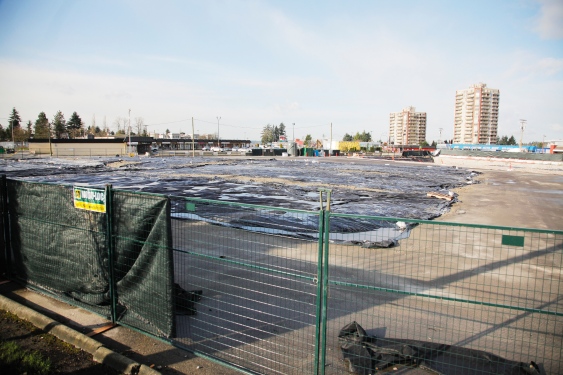 The city of Coquitlam is updating its affordable housing strategy in part because of the expected loss of between 700 to 1,000 rental units in Burquitlam. This NOW file photo from 2013 illustrates the change happening in the neighbourhood.   Photograph By Lisa King

The statistics over the last 20 years are sobering: an 89-per cent-increase in rent and a 200-per-cent jump in dwelling costs, compared to marginal, 20-per-cent gains in household incomes.

Pulled from recent census counts and other housing statistics, those numbers have formed the basis for Coquitlam council re-thinking its Affordable Housing Strategy, a process that began to take shape Monday.

As part of those broader topics, the city will weigh its options around changing bylaws and other processes to increase the overall housing supply, while also calling for relocation policies when rental properties are redeveloped.

The aspect of affordable living was also examined, specifically the cost of transportation and other factors that affect household incomes. To that end, the strategy focuses on higher density areas – complete with high-paying jobs and educational opportunities – being located near major transit hubs.

The majority of those units are located in Burquitlam and will be redeveloped due to the arrival of the Evergreen Line.

Between now and 2023, about 50,000 people are projected to move into Coquitlam, creating the need for more than 20,000 new housing units.

As a means to counteract those forces, the city will attempt to shift its focus onto newer, non-traditional housing models. Secondary suites will be relied upon, as will “lock off suites,” which are similar in nature to secondary suites.

Shared equity models will also be explored. That system sees the proceeds of new equity in a unit shared by both the original funder and the household in an effort to allow first-time buyers the ability to afford their first down payment.

A major thrust of the strategy calls for the city to partner with senior governments, service providers and nonprofits to leverage the plan, and the call for more money.

According to Mayor Richard Stewart, the city must move away from the clusters of rental and affordable housing traditionally found in areas like Austin Heights and Burquitlam.

Instead, those housing options must be spread equitably across the city.

“That by itself creates challenges – it segregates the community,” he said.

“But we do have some tools. Largely those tools won’t cut ribbons, but it will cut us red tape. It will help us cut out some barriers that exist in the way of providing that wide range of affordable housing options.”

City staff will now fine tune the plan and present an updated version to council at a later date. From there, the strategy will move into the public consultation and stakeholder feedback phase.